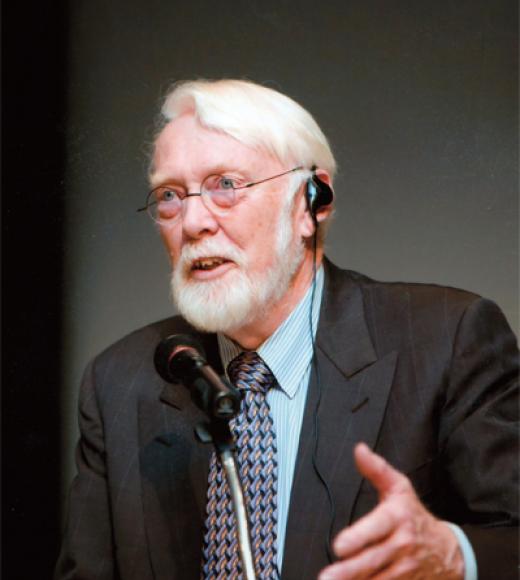 Professor Emeritus Dean MacCannell has
two pet projects at the moment. His long-term research on
"landscaping the unconscious" has taken on new proportions to include
work on the "future of the city." In this effort, he is joined by
collaborators Juliet Flower MacCannell and Bernie Lubell. In
addition, he has also helped secure two-year funding for an
experimental residential treatment facility for chronically homeless
women and children in Yolo County. He serves as head of the Project
Evaluation team for this new facility.

MacCannell's classic book, The Tourist: A new Theory of the
Leisure Class has just been republished in a new edition by The
University of California Press (1999) with a "Foreword" by critic
Lucy Lippard, and a new "Epilogue" by the author. The results of
MacCannell's study of ten thousand case files of homeless clients of
county services just appeared in California County Journal
(July/August, 1999). His critical study of Disney's new town of
Celebration, Florida just appeared under the title, "New Urbanism and
its Discontents," in Joan Copjec and Michael Sorkin (eds.) Giving
Ground: The Politics of Propinquity, Verso (1999). His article,
"The Curse of J.B. Jackson" is about to appear in Design Book
Review.

MacCannell continues to be active in the San Francisco Bay Area
artist community, serving on the Advisory Board of the International
Group Show "Citizen" at SOMAR. He was also recently elected a Fellow
of l'Ecole Freudienne de Quebec, co-responsible (with Juliet Flower
MacCannell) for the formation of the California Psychoanalytic
Circle.

In addition to his research and writing, and his duties as Program
Chair, MacCannell maintains an active lecturing schedule. He has
spoken recently at UCLA, Berkeley, the Davies Forum in San Francisco,
and will give lectures on the history of landscape representation in
England and Finland in September, 1999.

Professor Dean MacCannell's recent book, Empty Meeting Grounds, is a major synthesis of
his research on community and landscape change. The book has been
widely reviewed and represents a major contribution to the literature
on landscape, community, and culture. He is a visiting scholar at the
Headlands Institute in Marin and has lectured widely over the past
year.

Member of the Collegium of the International Semiotics Studies Association, 1984-present.

Executive Director of the Semiotic Society of America, 1985-1994.

Founding Member of the Research Group on the Sociology of Tourism, International Sociological Association, 1985-present.

Scholar in Residence, Headlands Center for the Arts, 1993-94.

2013  The Tourist: A New Theory of the Leisure Class, fifth edition with a new “Introduction” by the author, University of California Press.

2011  The Ethics of Sightseeing, University of California Press.

1999 The Tourist, reprinted with a new afterword by the author, Berkeley: University of California Press.

MacCannell, D., and MacCannell,
J.F. "Violence, Power and Pleasure: A revisionist reading of
Foucault from the victim perspective." In C. Ramazanaglu (ed.), Up
Against Foucault: Explorations of Some Tensions between Foucault
and Feminism. London: Routledge. 1993.

MacCannell, D. and MacCannell, J.F. Social Class in Postmodernity: Simulacrum or Return of the Real. In B. Turner and C. Rojek (eds.), Forget Baudrillard. London: Routledge. 1993.